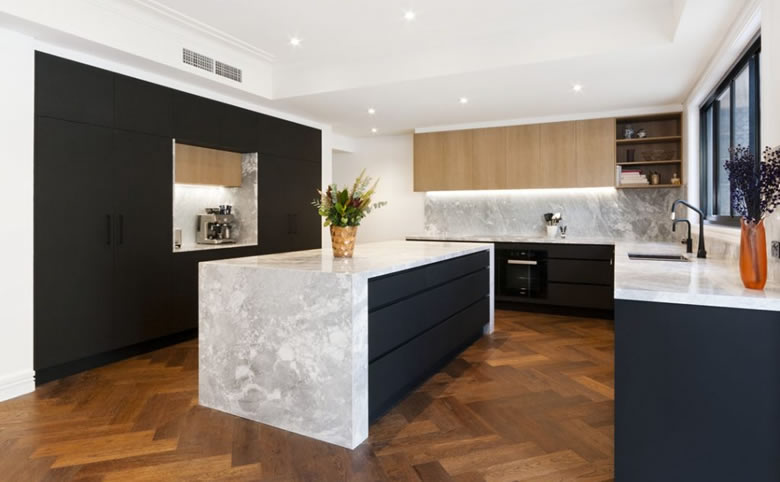 Are you looking for an alternative to marble that isn’t so prone to staining and damage? Have you considered super white dolomite?

Dolomite is a naturally occurring sedimentary carbonate rock, similar to limestone and marble. Like limestone, dolomite’s colour ranges from white to grey to light brown, although other colours such as red, green and black are possible, but more uncommon.

In its natural stone form (also known as dolostone), dolomite is commonly crushed and used as aggregate in road bases and construction projects. It can also be calcined for the production of cement and used as a soil conditioner for the agriculture industry.

When subject to heat and pressure, dolomite can start to crystalise, eventually turning it to dolomitic marble. In its natural crystalline form, dolomite looks similar to marble, with a crystalline structure and white and grey tones.

What is Super White Dolomite?

Super white dolomite is a blend of dolomitic marble and quartz. It’s crystalline structure and rich quartz veining means it looks like marble. However, because of the presence of quartz, it is harder, denser and less porous than typical marble. This means it’s more resistant to staining, etching and water damage.

Where does it come from?

Super white dolomite is quarried in the southern region of Bahia on Brazil’s east coast. The raw stone is shipped to Brazilian processors who shape and polish the stone into slabs ready for export around the world.

What’s it used for?

Super white dolomite is an excellent substitute for marble. That means it’s good for indoor and outdoor architectural and decorative purposes. It can be used for kitchen benchtops and splashbacks, indoor and outdoor tabletops, bathroom counters and vanities, feature walls, flooring and tiling, as well as various decorative and artistic purposes. Anywhere you might be inclined to use marble, super white dolomite is an excellent alternative.

What are the Benefits?

The benefits of super white dolomite stem mainly from the fact that it looks like marble while being more durable and less prone to damage. Because of the presence of quartz, dolomite is naturally stronger than marble. That means that it’s less likely to chip, crack, scratch and etch. Dolomite is also denser and less porous than marble, so it’s less prone to water damage and staining. It’s also incredibly heat resistant, which makes it great for use in the kitchen.

Dolomite is suitable for indoor and outdoor architectural and design applications. It’s tough, durable and designed to last a lifetime. However, it does require some basic maintenance to keep it looking great and ensure you get the best use out of the material.

Super white dolomite surfaces must be professionally sealed before use and resealed annually. All natural stone surfaces are susceptible to staining by a range of common household products like coloured foods, cooking oils, drinks, make-up, dyes and soaps. Without sealing, natural stone surfaces can easily become permanently damaged.

Is it Worth it?

While super white dolomite doesn’t carry the hefty price tag that comes with such high-end marbles as calacatta and statuario, it is still a premium material and is priced accordingly. Other materials, like granite or engineered stone, will be just as (if not more) durable and cheaper. You can also have a look on “Different Types of Marbles”

View all posts by Admin